Julia Roberts is enjoying a family vacation in the West of Ireland with her five-year-old son Henry and three-year-old twins Phinnaeus and Hazel. 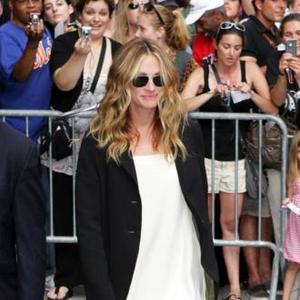 Julia Roberts is enjoying a family vacation in the West of Ireland.

The 'Mirror Mirror' actress is currently holidaying in County Mayo with her five-year-old son Henry and three-year-old twins Phinnaeus and Hazel, and she treated the kids to a day out at the Westport House Pirate Adventure Park yesterday (14.08.12).

It is unclear if her husband DANNY MODER is with the family but Julia was accompanied by a driver as she made her way around the Theme Park, carrying her children's jackets.

Managing director of Westport House, Karen Browne, told the Irish Independent newspaper: ''She just said she was having a lovely day and she was really enjoying the place. That was it. I got The Feeling she just wanted a quiet time.''

Julia is believed to be staying in the Louisburgh area, about 22km west of Westport.

She brought her brood to the beach on Sunday (12.08.12) and stopped off to treat the kids to an ice cream at the Old Head Cafe and Shop, according to mayonews.ie.

The star has strong links with Ireland, thanks to her close relationship with chauffeur Mick Devine.

The pair became friends years ago when Julia broke up with her then-fiance Kiefer Sutherland just days before their scheduled wedding on 11 June 1991 and absconded from the Shelbourne Hotel in Dublin.

After she called for a taxi at 2am, Mr. Devine brought her to his home in Palmerstown to stay with his family to escape the media fallout and they have remained close ever since.