Julia Roberts held a private memorial for her mother Betty Lou Motes' death, after she lost her battle to cancer on 19 February. 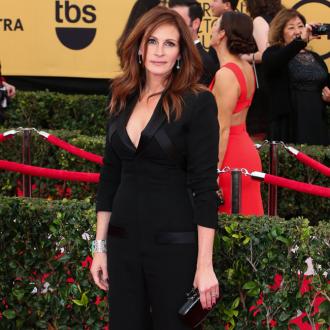 The 47-year-old actress' mum passed away on 19 February aged 80, after losing her battle to lung cancer, and she only invited her mum's nearest and dearest to the memorial, which was held in the family's local cemetery in Smyrna, Georgia.

Julia was accompanied by her ten-year-old twins Hazel and Finn, but her husband Daniel Moder and the couple's younger son Henry, seven, were not seen in attendance.

According to Hello online, the 'Pretty Woman' star wanted the memorial service to be as private as possible and hired about ten security guards to keep members of the public out of the cemetery while they conducted the memorial at the Motes family plot, where Julia's younger half-sister Nancy Motes is also buried.

Nancy - who was 37 at the time of her death - was Betty's daughter and only child from her second marriage to Michael Motes. She had been battling an addiction to prescription drugs and was found dead inside her Los Angeles apartment of an apparent drug overdose.

After she passed away, the siblings' mum Betty moved in with Julia and she was treated at the nearby Saint John's Health Centre in Santa Monica for cancer. Betty herself died just ten days after Nancy's first death anniversary in February 2015.