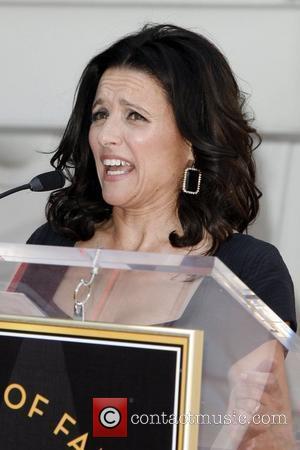 Hollywood bosses were left scrambling after realising they misspelled Julia Louis-Dreyfus' name on her Walk of Fame plaque - just hours before they were due to unveil it at a ceremony.
The Seinfeld actress was honoured with the 2,407th star in Hollywood on Tuesday (04May10) - but organisers were left red-faced after embossing the tribute with the name 'Luis' instead of 'Louis' and omitting the hyphen between her surnames.
They hurried to create a temporary replacement in time for her dedication ceremony, where the actress laughed off the typo.
She told the crowd, "The misspelling was so perfectly apt, a great metaphor for showbusiness. Right when you think you've made it, you get knocked down. It's an ideal metaphor for how this business works."
Hollywood Chamber of Commerce bosses have promised to refit the sidewalk with a correctly spelled star and plan to send Louis-Dreyfus the chunk of 'Luis' pavement as a souvenir.