The 53 year-old comedienne went completely nude for the magazine's front cover, showing off a rather comprehensive political tattoo. 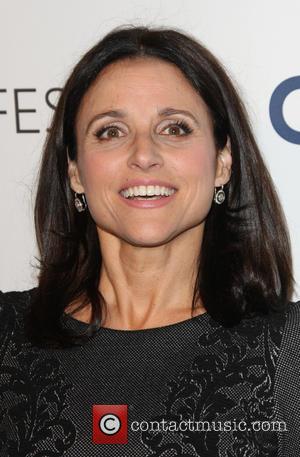 Julia Louis-Dreyfus bared all for her cover shoot with Rolling Stone.

The comedienne also got inked up for the shoot and had the United States Constitution tattooed on her back.

The music magazine, who used photographer Mark Seliger for the risqué photos, crowed her 'The First Lady of Comedy.'

The 53 year-old took to Twitter to explain her racy magazine cover, and borrowed an excuse from Toronto major Rob Ford used when he was caught taking crack cocaine last November (2013).

"In my defense, "I was in a drunken stupor" #crackexcuse," she tweeted, along with a photo of her Rolling Stone cover.

Louis-Dreyfus kicked off her comedy career back in 1985 when appearing on 'Saturday Night Live', and then starred in the beloved sitcom 'Seinfeld' as Elaine from 1989.

The 'Enough Said' actress currently stars in HBO's 'Veep', playing the lead role of Selina Meyer, and she revealed to Rolling Stone how she has stayed motivated to succeed after all these years.

"There is sexism - I'm not denying its existence," she said. "But I'm saying that I will deny its effort against me. I just pay it no never mind and say, 'Get out of my way.'"

Although Louis-Dreyfus has had a hugely successful acting career, there is always speculation that she is far wealthier than an average actress due to her father's business 'The Louis Dreyfus Company,' with some believing she is worth billions.

"I've been attached to that," she said. "It's unbelievable, because whatever I do, people just assume it's true. Welcome to the f---in' Internet," she said to the mag, squashing this speculation.

The funny lady also recalled a time the cast of 'Veep' were attempting to think of a swear word to use on the show, suitable for her foulmouthed character.

"Once, when we were trying to come up with the particular perfect, horrible, swear-y thing to say in Veep, I said, 'You do realize that if we were 12, we would get in big trouble for this conversation," she explained.