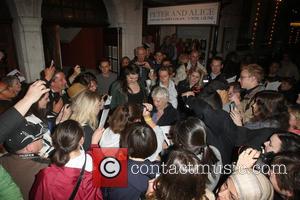 Dame Judi Dench is backing a new campaign to cover the maintenance costs of a war monument in London.

The Bomber Command Memorial was unveiled by Queen Elizabeth Ii last summer (12) but The Royal Air Force (Raf) Benevolent Fund is facing a $2.3 million (£1.5 million) payout for the statue's overheads.

Skyfall star Dench has now signed on as a patron of the Upkeep Club, to raise funds for the monument's care, and she launched the campaign in the U.K. capital on Tuesday (21May13).

She says, "The Bomber Command Memorial, which so nobly honours the sacrifice of the fallen aircrew, has already become a place of pilgrimage for relatives and former acquaintances of the 'Bomber Boys' lost during the Second World War.

"Veterans and widows, often having travelled thousands of miles, are reminded of treasured friendships and past romance, so prematurely ended, so fondly recalled. Through membership of the Upkeep Club we directly support the commemoration of those who died for our individual and national freedoms. We need people to remember. This memorial is the perfect setting for this."