The British actresses were two of the six honorees at the annual Britannia Awards on Thursday night.

Emma Watson and Dame Judi Dench were among the British movie stars to be honoured at the Britannia Awards. The annual ceremony was hosted by BAFTA at the Beverly Hilton Hotel in Beverly Hills, Los Angeles on Thursday evening. 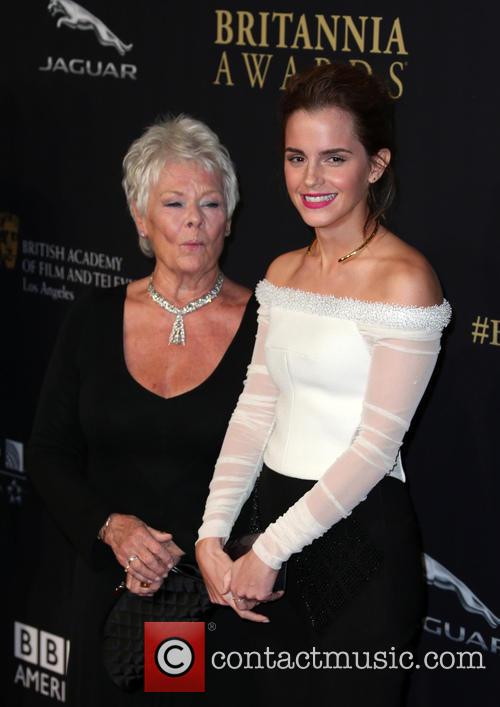 Dame Judi was given the Albert ‘Cubby’ Broccoli Award for Worldwide Contribution to Entertainment, a gong named after the legendary James Bond movie producer. Presented with her award by Dustin Hoffman, she said: "I'm rather overwhelmed by [the award], because I didn't ever expect to have a film career at all.”

Dench has of course played the British spy’s boss M in all of the movies since 1995’s GoldenEye. She’s also been the high-profile star of a lot of successful films in the recent past, including Philomena and The Best Exotic Marigold Hotel.

UN Women Goodwill Ambassador and former Harry Potter star Watson was awarded the British Artist of the Year prize. She used the opportunity to pay tribute to Dench, saying: "She's just all soul and all grace and strength and beauty, and for me, she's an iconic British actor. She's what you aspire to be.”

Other winners on the night including Robert Downey Jr. for the Stanley Kubrick Award for Excellence in Film, director Mike Leigh, comedienne Julia Louis-Dreyfus and Mark Ruffalo for his humanitarian work.

The Britannias began in 1989 as a bridge-building exercise between Hollywood and the British film industry. Therefore, it’s not entirely surprising to see such a wealth of British talent being honoured and recognised, but this year does indicate the number of powerful performances from British artists.

More: Threat to leak nude pictures of Emma Watson turned out to be a hoax to try to shut down 4chan