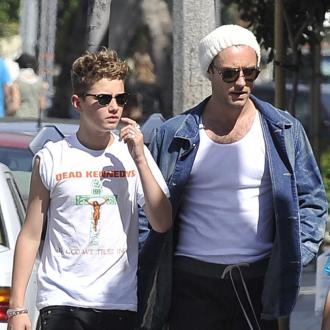 Jude Law's son has made his runway debut.

The British actor's 17-year-old son Rafferty showed off his modelling credentials during the opening night of London Collections: Men on Sunday (15.06.14), taking to the catwalk for the DKNY Men fashion show.

The blonde teen, who clearly takes after his famous father and in the looks department, looked effortlessly cool in a baggy, monochrome ensemble emblazoned with the brand's logo.

Jude - who is the face of Dior Homme Sport - watched from the front row, while the rising star's mother Sadie Frost was nowhere to be seen.

Rafferty's very first foray into the industry was a fashion film for Tiger of Sweden in 2013 and he has also shot a British VOGUE spread with Pixie Geldof.

He isn't the first celebrity offspring to make his mark on the modelling world in recent months, however.

Kendall Jenner has established herself as a bonafide model this year, walking for top designers at New York Fashion Week and scoring a fashion spread in VOGUE Paris.

The delighted singer was seen clapping her hands in joy as the adorable toddler, whose father is music producer Swizz Beatz, trotted down the runway wearing a tweed blazer, tartan pants and a woolly jumper emblazoned with a dog's face.