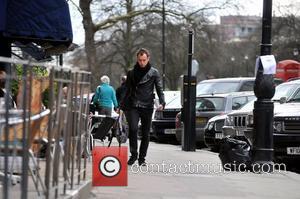 Jude Law and Kevin Spacey took to the streets of London on Monday (28Mar11) to protest against the regime of Belarus president Alexander Lukashenko.
The two actors waved placards as they marched across the British capital with other activists, as well as famous faces including Sir Tom Stoppard and actor Roger Lloyd Pack, to protest against Lukashenko's alleged brutality and incarceration of political prisoners.
The march started at the Victoria headquarters of public relations firm Grayling, which has an office in the Belarusian capital Minsk, and culminated at the hub of British politics, the Houses of Parliament, for a performance by the Belarus Free Theatre group, a company which has seen many of its members imprisoned.
Law said of the march, "We have the opportunity in this country to be heard and to use our freedom of speech. It's our responsibility, therefore, that we speak for those who are less fortunate, especially as fellow Europeans.
"One would hope that this dictator will internationally be recognised for what he's doing, the tyranny that he's forcing people to live under."
While Spacey revealed he was inspired to join the campaign after seeing the Belarus Free Theatre group perform in New York last year (10), adding, "It's the only time I've read a programme saying nearly every single member of a theatre company has been arrested or imprisoned."