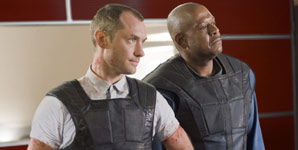 We talk to Jude Law and Forest Whitaker about their latest film Repo Men.

In the near-future, people can enhance their bodies, replacing any damaged organ with state-of-the-art artificial replacements from The Union, headed by Frank (Liev Schreiber). There's one catch; it's expensive and if you can't keep up with the payments, your body parts will be repossessed by the REPO MEN. with painful and bloody results.


Q: Tell me how did you both get involved in this?
JL: I was involved early on. It's the usual story - I was sent the script. I'd never read anything as original in my life - it made me laugh and I like the themes that seemed very relevant yet set in this amazing world. You know, a lot of people say 'it's a futuristic film.' I think in a way it's more about an alternative, parallel universe and there are certain things about it that are more advanced in terms of socially and with technology. To me it's more a fable about where we are already in regards to health care, vanity, indulging one's body and being able to replace everything if you want to on credit; plus the idea these guys are able to come and repossess your car or house and in this particular world they can come and repossess you.

FW: For me there's a dark humour to it that I enjoyed when I first read the script. There's humour in this odd universe and it doesn't feel like it's too far in the future. That allowed us to look at all these little issues that are going on in this crazy and mad world. It was also appealing to get a chance to work with Jude because I like his work.

Q: Did you see it as a buddy movie in a funny kind of way?
JL: At its heart it's really a film about friendship and about former military men. It's about men who are taken into the military, trained up, encouraged to kill and then sort of spat out. And then what do they do with themselves? Where do they go? They can't enter into normal society as such, so they find a role that uses those skills and if you like, excuses those skills.

FW: It's also about a change in a friendship. As far as Jake is concerned he would like to stay like this forever but Remy starts to grow and move away and that's a frightening thing. It's about what happens to my world when it changes and I'm left by myself.

Q: There are several themes in the film - the way society lives on credit, what happens to military men when they leave the service and of course, health care which are all very topical. Did you feel that there is a message in the film?
JL: I didn't personally go in saying 'This is relevant' I liked the themes and I saw that they were cleverly interwoven into the story. Honestly, I look at a script in a slightly more polarised way. I liked its heart, its humour and I liked the fact that it was a film about friendship. Then as we made the film all of these relevant themes grew and none more so than health care, so yes, they are all relevant.

Q: Clearly they are both very physical roles. How did you prepare?
FW: We trained hard and we had a lot of fun with it. That's also how Jude and I got to know each other through training and working out the fight sequences.

JL: It's tiring but you know, in all honesty the whole job then becomes about staying in shape, in the right mindset and taking precautions because you don't want to get injured and hold the film up. So it's a challenge. But it's a fun challenge.

Q: The film has some graphic scenes, especially when they are repossessing organs. It looks very realistic but did you get squeamish at all when you were doing that stuff?
FW: You know, we didn't get squeamish.You get into the right mindset.

JL: Another important part of this film is making the gorier and more violent elements based in a reality. And it's important that you believe these guys go about it in a very matter of fact manner. A few people have said that it's a very violent film - quite shockingly so - and I personally am very glad that they said that because I think we have seen too many films with action and violence where it washes over you. I think that's quite questionable. I think in a film like this where you do go 'whooa! That's graphic...' is a good thing because I think it means you care about the story and we've not been desensitised to blood, guts and gore.

FW: That's part of the message, the personalised violence. Because at first we are going through it all and taking body parts but then you think 'will it happen to you?' And you have been laughing at the black humour, but now it could happen to this guy, Remy, that you care about, and they are going to come to take his heart.