Fact: Past and present members of GUNS N' ROSES, Slayer, Lamb of God, Anthrax and Judas Priest have joined forces in the studio to record an album of original material under the supergroup name METAL ALLEGIENCE. The stars previously performed covers at events and on rock cruises like Motorhead's Motorboat, but now they have teamed up for the Nuclear Blast Entertainment collection, which features songs written by former Dream Theater star Mike Portnoy, Megadeth's David Ellefson and Testament's Alex Skolnick. The album is due for release in September (15).

Quote: "I'd love to be in there... It's a validation... When Priest got a Grammy for the first time, it was the best feeling in the world, not just for the band, but for the fans and for metal in general. So anytime that you are recognised for that type of thing, it's a beautiful thing, man, and I hope one day we'll get that opportunity." Judas Priest frontman Rob Halford is hoping he'll be inducted in to the Rock & Roll Hall of Fame with his bandmates.

Quote: "Even though I'm a metal singer, the fact that I’ve been able to appreciate other types of performers has probably paid dividends. When I listen to Michael Buble, it's exciting, it's inspiring. I feel the same way with Michael Feinstein or Ryan Adams. I'm drawn to singers who have something different to say vocally - and Adele would be in there. I saw (Barbra) Streisand in Phoenix and that was mind-blowing. Her voice is just so pure. I've also always had a passion for some types of opera... I sing Nessun Dorma when I warm up backstage." Judas Priest frontman Rob Halford enjoys listening to the world's great voices.

Quote: "I love Bruce. He's a great friend of mine. And he's very outspoken.... These things are said in many ways, and I'm sure he didn't mean it in any other way than Bruce sometimes goes off in one of his rants... I use a teleprompter now because I do so many things. I can't remember." Judas Priest frontman Rob Halford refuses to get upset about Iron Maiden star Bruce DICkinson's criticisms of the bald rocker's use of a teleprompter during gigs.

Quote: "In those days we couldn't afford to have our stage clothes made so we'd get them all from there." Judas Priest frontman Rob Halford reveals they had to perfect their iconic leather look by shopping at a fetish store.

Fact: Judas Priest's in-store record signing stint at New Jersey's Vintage Vinyl on 9 May (08) will be the heavy metal band's first in 25 years. Only 500 lucky fans will get to meet the band at the event.

Fact: European rock supergroups the Scorpions and Judas Priest are set to team up for a North American tour in 2008.

Quote: "I had a small part in a movie called SPUN a few years ago. I did a couple of scenes with Mickey Rourke. He turned out to be a big fan of the band." Judas Priest frontman Rob Halford was thrilled to find a high-profile fan of the group's music.

Fact: <p>NO COMMENT, the winners of KISS star Gene Simmons' reality TV talent contest Rock School have been given their big break by another classic rock outfit - Judas Priest have asked them to open for them when their Priest Feast hits Long Beach, California, on Sunday (30OCT05). </p> 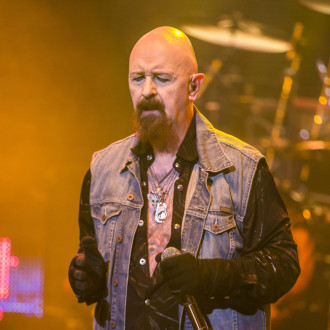