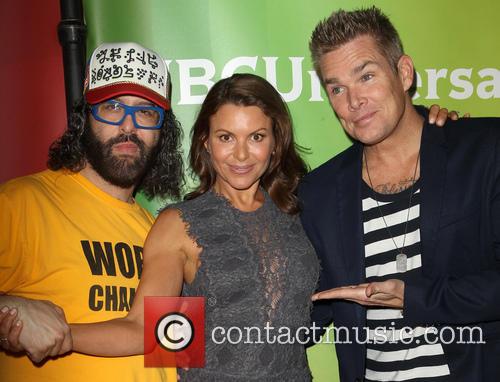 Sandra Bullock is seen sharing a joke with comic actor Marlon Wayans while they are being interviewed on the red carpet. Marlon dabs the interviewer's head with a towel before wiping his own. Sandra is also seen holding hands and hugging Melissa McCarthy as they pose for photographers; director Paul Feig briefly photo bombs them, before they are joined by the rest of the cast.

Judah Friedlander, who voices Larry in the animated movie 'Epic', talks about his previous experience in animation and the meaning of his T-shirt which has 'World Champion' written across it and a cartoon of himself.

As Blue Sky Studios' new animated movie 'Epic' comes to New York for the premiere, several of the film's stars are snapped on their arrival. The set up for photographs includes several cardboard cut-outs of characters, a grassy carpet and a collection of bracken and tree stumps.

Supermodel Heidi Klum is snapped taking a break from filming and talking to Judah Friedlander ('30 Rock') while sat barefoot on the street on Third Street Promenade in Santa Monica eating her lunch.

Mary Katherine is a regular teenage girl who somehow mysteriously appears in an enchantingly beautiful forest full of talking slugs and miniature soldiers. In this strange new world, a war is waging between the forces of good and those who do everything within their power to try to defend nature, and the forces of evil; those who are responsible for its destruction. Wishing she'd dreamt it all at first, Mary eventually joins a team of weird but friendly characters to help protect this world as well as her own which is also, consequentially, under threat. 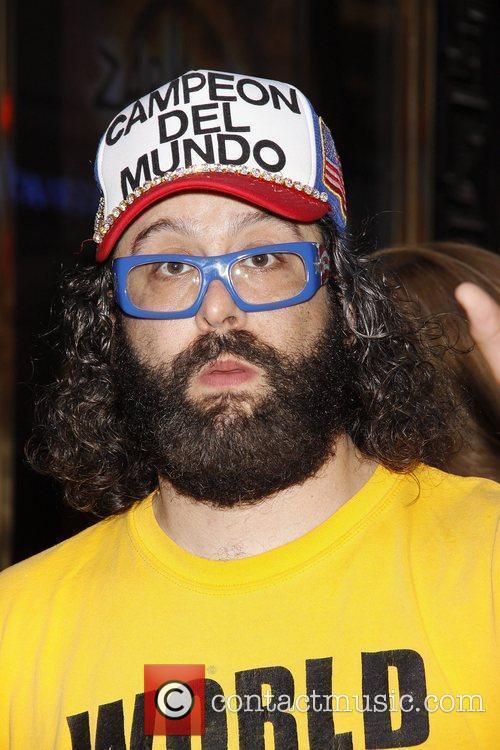 By Bill Gibron
Weak
During his days as SNL's reigning superstar, Eddie Murphy loved to compare himself to Elvis. Sure enough: Two decades later, the former '80s funnyman is allowing his career to die the same way The King did -- naked, bloated, and on/in the toilet. One imagines that, as long as there are Shrek sequels to keep him financially flush, the comedian turned commodity can crank out whatever cinematic self-delusions he wants. But with his latest effort, Meet Dave, Murphy faces one of his more daunting challenges ever -- erasing that atrocity known as Norbit from pop culture's tortured palate. It's a feat he fails at, almost despite himself.

For the tiny extraterrestrials from the planet Nil, Earth seems like the perfect solution to their problems. With their homeland long depleted of its main energy source -- salt -- the aliens plan on using an ocean-draining orb to replenish their supplies. In their humanoid-shaped and -sized starship piloted by a courageous captain (Murphy), they will infiltrate Manhattan, locate the missing device (it crash landed there three months earlier) and complete their mission. Along the way, the newly-named vessel Dave Ming Chang (Murphy, again) will befriend a young widow (Elizabeth Banks) and her son Josh (Austin Lynd Myers). As the police try to track down the man-shaped craft, a mutiny among the crew puts all in danger.

By Christopher Null
Excellent
Comic book heroes like Spider-Man and The Hulk get all the press. Hey, what about the little guy?

Harvey Pekar is the ultimate little guy -- not just in the comics world, where his American Splendor has been an underground phenomenon for decades, but in real life, as he has held down a steady gig as a file clerk in a Cleveland VA hospital since the beginning of the known universe.