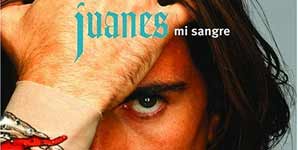 I first saw and heard Juanes performing his single 'La Camisa Negra' on a show on which he'd also reported on the worlds perception of Columbia, his country of birth, and I really didn't realise or appreciate who he was. I then found out he'd won 12 Grammies (Latin American and American), sold around 4.7 million copies of two previous albums ('Fijate Bien' and 'Un Dia Normal') and sold out the Shepherds Bush Empire in one hour; quite impressive stuff from an artist who's massive in Latin and North America but, oddly, little known outside Spanish quarters in Europe.

He released said single ' La Camisa Negra' (Black Shirt) on the 10th of March and his album 'Mi Sangre' (My Blood) was released on April 17th.

The album starts with my current favourite ' Amame' (You Love Me) an upbeat song that's bound to be a hit if released as a single for its passionately sultry Spanish delivery and the catchy hook also aids its commercial appeal. I also find ' Tu Guardian' – soft smouldering lullaby of a track delivered in Spanish over the acoustic guitar rounded off with stirring strings – quite emotive, even though I lack an understanding of the Spanish language, a testament to the strength and depth of the song. ' La Camisa Negra', the first single, is a good intro into the world of Juanes as it fully exhibits his guitar style and absorbing voice.

His vocal style, passionately Latin, is quite flexible in adapting to other styles as is evident on his duet with Nelly Furtado on the ballad ' Fotografia' (originally off his 2000 offering 'Fijate Bien' but added to this album for UK release) and the funky offering for more mainstream listeners ' La Paga' which features Taboo of the Black Eyed Peas. He stays appealing to the mainstream on the pop ballad 'Para Tu Amor' (for your love). The album produced by Gustavo Santaolalla (Surco Studios) is heavy on the guitar and electronic guitar riffs and this is no surprise as Juanes lists Metallica as one of his inspirations. This influence is heaviest on ' Que Pasa' which has a political slant where he asks what's happening with the world. There's the ever present guitar on songs like 'No siento penas', Damelo' and even the full phat remix of 'La Camisa Negra' is still driven by the guitar.

Juanes rode on the crest of Latin music's acceptance by the mainstream in the late 90's but he differentiated himself by not translating from his native Spanish to English for approval. He won over the fans by giving them good music. I'm not a big fan of Latin Rock but it's quite easy to see he puts his heart into his music and I guess that's what fans love to see from their artists, whatever the language…