"What a great joy. Thank God, and all the fans," said Juanes after picking up the much-coveted award. The 40-year old also teamed up with guitar hero Carlos Santana, as the pair evoked a standing ovation from the excited crowd. Also picking up the more best long-form video award, Juanes ensured his position in the pantheon of Latin Grammy legends with 19 awards en counting. Juanes pulled Juan Luis Guerra - who won his own prize for producing the album - up on stage with him, paying tribute to the Dominican singer songwriter. "Here's to the maestro Juan Luis Guerra for making this possible," he said of him. Jesse & Joy collected their record of the year prize with the words, 'Viva Mexico!'. "Thanks to people like Juanes and Juan Luis Guerro who have inspired us. Love and peace," said Jesse. The duo also won best contemporary pop vocal album for their third studio album Con Quien Se Queda El Perro? (Who Is The Dog Staying With?).

Elsewhere, Brazilian singer-songwriter Caetano Veloso, 70, was honoured as the Latin Recording Academy's person of the year. Veloso was one of the founders of the 1960s musical movement Tropicalia and is still one of Brazil's most popular and artists. 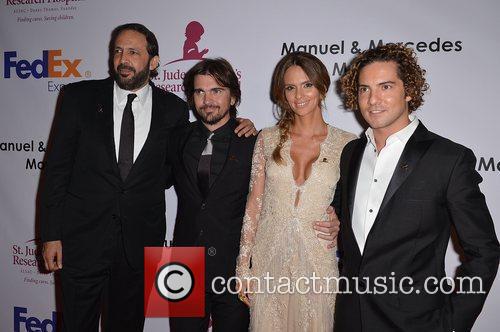