Fact: Rocker Peter Hook marked the 35th anniversary of his former JOY DIVISION bandmate Ian Curtis' death by playing the band's 47 recorded tracks in the tragic singer's hometown on Monday (18May15). The bassist played the band's entire back catalogue in chronological order in a disused church in MACclesfield, England. Curtis hanged himself at his home in MACclesfield on 18 May, 1980.

Fact: Tragic JOY DIVISION star Ian Curtis' old wooden kitchen table has gone under the hammer on eBay.com. Bidding began at $150 (£100) on Thursday (07Nov13) and will continue until 13 November (13).

Fact: JOY DIVISION song Love Will Tear Us Apart has been named the greatest track of the last 60 years by editors of NME magazine. Pulp's Common People was second and "Heroes" by David Bowie came third.

Fact: U2 were in the studio with producer MARTIN HANNETT the day JOY DIVISION were recording LOVE WILL TEAR US APART.

Fact: A collection of previously-unseen notes written by late JOY DIVISION and New Order manager ROB GRETTON is to be published in a book next month (07Oct08). 1 TOP CLASS MANAGER, compiled by Gretton's widow LESLEY GILBERT, will feature to-do notes, diary entries, letters, studio notes and posters dating from between 1978 and 1980.

Quote: <p>"My mum was only 21 when she had me in '77, so she was a huge New Romantic the whole time I was growing up." JONATHAN RHYS-MEYERS' mother is thrilled her son is being considered for the role of tragic JOY DIVISION frontman Ian Curtis in Anton Corbijn's new biopic. </p> 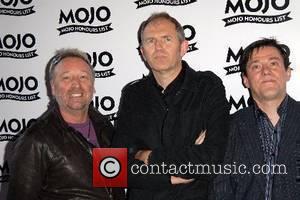