On Set Pictures From The Filming of 'Avengers: Age of Ultron' [Photos]

Scroll down for more on-set pictures 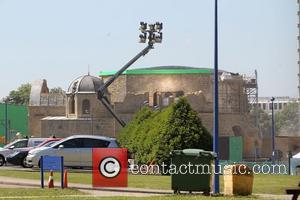 As the production for 2015’s most anticipated movie, ‘Avengers: Age of Ultron’ rumbles on, some on set pictures have arrived from the North London leg of filming.

The film has big boots to fill: Marvel’s Avengers was a breakthrough success for the franchise’s move to cinema, culminating in brilliant reviews and an even better box office gross, pulling in $1.5b from the worldwide market.

Recently, the guys at Den of Geek were lucky enough to grab a sneak look at some of the production footage from Age of Ultron, and were then nice enough to write up what they saw – a nice touch considering fans of the franchise are currently feeding on the meagre scraps thrown out by Whedon et al.

“There were shots from a couple of the locations (peppered with statements from Joss Whedon) which included Italy and the UK. Joss Whedon explained that they were keen for the action to be set across the world to give a sense of scale to the proceedings,” wrote Duncan Bowles.