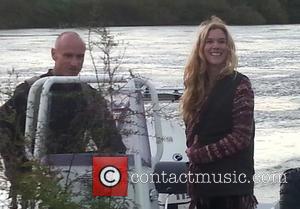 British singer Joss Stone was given the opportunity to ride with an air ambulance crew during a charity visit in her native U.K.

The You Had Me hitmaker is currently back in the U.K. for a brief break in her ongoing world tour, and she took time out to visit the Devon Air Ambulance Trust close to her home in Devon, England.

Stone made the visit to raise awareness and bring in donations for the organisation, which provides helicopter rescues across the south west of England, and she was given the chance to ride with one of the crews.

A statement posted on the star's Facebook.com page, reads, "Back in the Uk... Joss went and visited the local Devon Air Ambulance Trust. Charity... Fortunately for us, one of the helicopters was due for its Mot (Ministry of Transport) Service, so Joss and team had a rare opportunity to take a ride with the crew and experience what they do on a daily basis."

Pictures posted on the page show Stone posing with the air ambulance crew and riding in the helicopter with them.