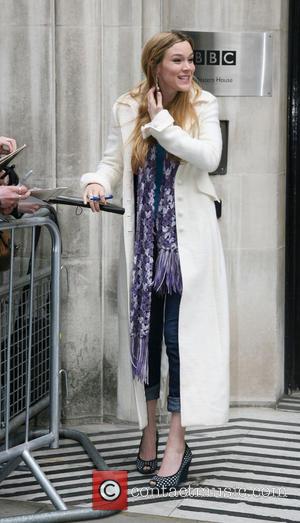 Two thugs who planned to kidnap and murder soul singer Joss Stone are facing lengthy jail sentences after they were convicted of the sinister plot on Wednesday (03Apr13).

Junior Bradshaw, 32, and Kevin Liverpool, 35, intended to snatch the You Had Me hitmaker from her remote countryside mansion, steal her estimated $16 million (£10 million) fortune, and then cut her head off and dump her corpse in a river.

The evil plot was foiled when neighbours in the village where Stone lives called police after spotting the pair acting suspiciously in a car.

Bradshaw and Liverpool had both denied the allegations, and Bradshaw told the trial at Exeter Crown Court in England he had never even heard of Stone before his arrest and had merely travelled to the village of Cullompton in Devon - 200 miles (322 kilometres) from the home he shared with Liverpool in Manchester, England - for "a day out".

A jury convicted both men of the heinous plot after hearing cops had found balaclavas, a knife, and a Samurai sword in the car when the men were arrested in June 2011. A search of their home later uncovered handwritten notes detailing the plan and naming Stone.

Giving evidence during the case, Stone told the hearing she was shocked when police told her of the kidnap plot and she has since bolstered security measures at her home.

They are currently awaiting sentence.