The 'Hunger Games' actor Josh Hutcherson has adopted a puppy from a rescue centre. 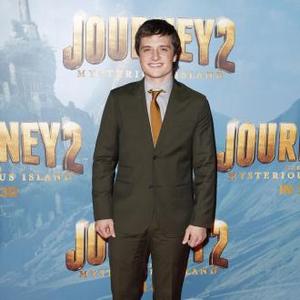 Josh Hutcherson has adopted a puppy.

The 'Hunger Games' actor visited a rescue centre where he chose his new dog and the animal is already settled into his new home.

A post on the 19-year-old star's Facebook page read: ''Way to go Josh! Josh just adopted a Blue Pit puppy from a pit rescue!! Thanks to Josh, he now has a full stomach, warm bed and a loving owner!''

Josh isn't the only celebrity to have adopted a rescue dog.

In February, Drew Barrymore and her fiance Will Kopelman took home an eight-week-old puppy from Bark n' Bitches, a humane pet shop in Hollywood, California.

Store owner Shannon von Roemer said: ''They really were very thoughtful and not impulsive about making the decision.

''Drew, being such a huge dog fanatic, was great to Will. She really wanted him to feel it out and make the decision.''

Meanwhile, 'Twilight' actor Robert Pattinson took on a four-legged friend, Bear, to keep him company while he's shooting on location.

He said: ''I know it's sad. A lot of actors have a bunch of people who kind of just go up and stay with them for like two months, like an entourage. But my friends, their egos are too big.

''They'd be like, 'I'm not part of your entourage. I'll stay in a free hotel for a bit if it's in New York or Los Angeles but I'm not going to come out to some random town in the sticks.

''That's kind of why I adopted the puppy. It's from a shelter and he was going to be put down.''