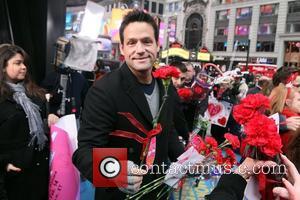 Picture: Josh Hopkins The stars of 'Cougar Town' hand out flowers for Valentine's Day to fans outside ABC Studios before appearing on 'Good Morning America'...

Actor Josh Hopkins was forced to drop out of a triathlon on Sunday (01Apr12) after injuring himself in the final leg of the race.
The Cougar Town star entered into the Nautica South Beach Triathlon in Florida in a bid to raise money for St. Jude Children's Research Hospital, but unfortunately all didn't go as well as planned.
According to the New York Post, Hopkins successfully mastered his 18-mile (29-kilometre) bike ride and half-mile (0.8-kilometre) swim, but he couldn't complete his four-mile (6.4-kilometre) run.
And fellow competitor and X-Men star James Marsden ran into a little trouble of his own - he got lost and veered off the cycling course.
A source tells the publication, "He took a wrong turn and biked an extra eight miles by mistake."
In the end, Wedding Crashers funnyman Geoff Stults and U.S. TV presenter Natalie Morales finished first in their respective male and female categories, with Marsden's co-ed team also snagging a top prize in their division.
Also partaking in the endurance competition was Burn Notice star Jeffrey Donovan, The Office's David Denman and Chilean actor Christian de la Fuente. The event raised a total of $401,422 (£250,889) for pediatric cancer research.