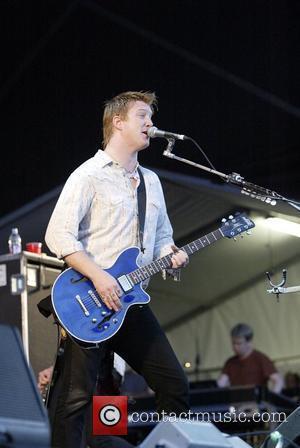 Josh Homme has accused DWARVES singer BLAG DAHLIA of "f**king with the wrong guy" following an incident last year (04) when the QUEENS OF THE STONE AGE star attacked Dahlia at a Los Angeles gig in retaliation for a lyrical jibe.

Homme went to a Dwarves concert in November (04) where he was said to have smashed a bottle over Dahlia's head shortly before the band took the stage.

At the time it was reported Homme was responding to Dwarves song MASSACRE, on which former QOTSA bassist NICK OLIVERI plays. The lyrics to Massacre include the couplet: "This one goes out to Queens of the Trustfund / You slept on my floor and now I'm sleeping through your motherf**king records."

But Homme says, "I would never give a s**t if a 40-something white guy was rapping about something like that.

"If I was going to punch someone, it would probably be because the guy was asking for it. If you're all just talk and you run into someone that doesn't just talk, then obviously you're in trouble.

"And if you were someone who was repeatedly saying s**t about us, and you were a singer for The Dwarves, you were probably f**king with the wrong guy."

QOTSA multi-instrumentalist TROY VAN LEEUWEN (corr) adds, "This is just my personal opinion, but if someone came into your dressing room and knocked you on your a** in front of everyone, I'd probably be a little embarrassed."

Queens of the Stone Age rip into Imagine Dragons

Josh Homme's Months Of Despair After Brush With Death

Josh Homme's near car crash with One Tree Hill star