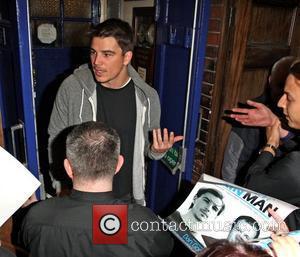 Picture: Josh Hartnett Leaves the Apollo in West London where he is starring in the theatre's production of 'Rain Man' London, England - 19.09.08

U.S TV judge JUDITH SHEINDLIN was pleasantly surprised during a performance of Josh Hartnett's stage production Rain Man - because the play gives her a mention.
The star - better known as Judge Judy - watched Hartnett in the stage adaptation of the 1988 movie during a recent trip to London and was stunned to hear references to her hit TV show.
Hartnett's co-star Adam Godley says, "My character mentions her lot in the play as Judge Judy is his favourite programme, but she had no idea - she was just in town and wanted to see a play.
"I had never seen an episode before we started rehearsing, but decided I had better watch a few episodes and ended up hooked.
"I was thrilled to meet her. She very kindly signed her latest book for me."