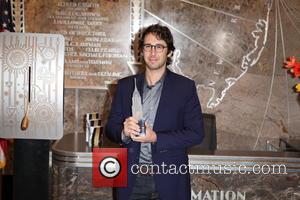 Singer Josh Groban faced an attack of the nerves before performing at a charity gala in Beverly Hills, California on Saturday (11Oct14), because it was his first time singing in front of his new girlfriend Kat Dennings.

The You Raise Me Up hitmaker recently began dating Dennings and the stars made their debut as a couple by walking the red carpet together at the weekend's Carousel of Hope Ball.

However, speaking before the gig, Groban admitted he needed to step his game up to make sure he didn't mess up in the actress' presence.

He told U.S. news show Entertainment Tonight, "I do have such a lovely date tonight. I'm very lucky my girlfriend has joined me tonight. It's her first time hearing me sing, so I'm going to do some extra warm-ups so I don't suck."

Groban went on to reveal he didn't win Dennings over by serenading her - because he feared it would be too "cheesy".

He added, "I mean, we joke sing all the time. We harmonise on the radio (sic), but no, I haven't really done (any real singing). It always seems like a cheesy move on my part... like, 'Hey, you wanna hear me sing?'"