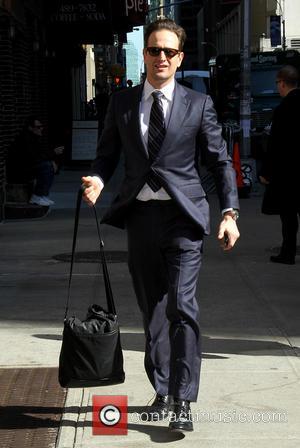 Picture: Josh Charles - Celebrities outside the Ed Sullivan Theater as they arrive for their taping on the Late Show with David Letterman - New York...

The actress reveals she received the script for the latest episode during the holidays and decided to glance through it during a break from planning her Christmas Day festivities.

She tells TvGuide.com, "I'd get to a certain point and I'd put it down because I knew what was coming - that this was the script.

"I actually had an emotional inability to just read any further and then finally one day right before Christmas, I read it all the way. I couldn't even see the page, my eyes were just so filled with tears. It was really very, very emotional."

Charles' popular character was killed off during the most recent episode, which aired in America on Sunday (23Mar14), and his Emmy-winning co-star admits she was "dreading" shooting the episode.

Baranski adds, "It was just very sombre. The subsequent weeks of shooting that episode and the following episode, which was everyone's grief, I have to say that those were maybe the most difficult weeks of my life as an actress just in terms of emotion."

But at least the actress knew her co-star was leaving the show, unlike fans who were given no warning - and she isn't surprised about the outpouring of grief online.

She explains, "People really act as if it's a real person. It's almost scary. They're so heavily invested that I think it's a tribute to the show and how much people believe in the characters and the show that they would be so riled by it and moved by it... What I think was so amazing, of course, is that it was actually kept a secret. The audience just did not see that coming.

"He (Charles) came to me at the end of season four and said that he was going to be asking to leave and he gave reasons... He won a People's Choice Award and he got a Golden Globe (nomination). I just kept thinking that he would think again about leaving such an extraordinary character and show, but he held fast to his decision, so I was surprised. I'm still kind of in disbelief."