Josh Brolin says he had a special chemistry with Will Smith when filming 'Men In Black 3'. 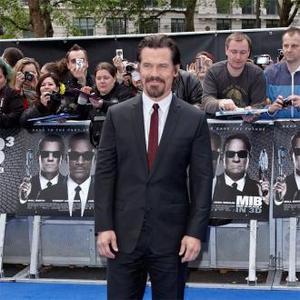 Josh Brolin says he had a special chemistry with Will Smith.

The 'No Country For Old Men' actor has revealed the natural chemistry and banter he shared with his 'Men In Black 3' comedy partner was one of a kind.

He said: ''When the camera rolls, something happens. It was very nice, I hadn't felt that with a lot of people. Usually you have to act at acting well. With Will Smith and I, something just happens when those cameras start rolling.

''And we're very different people, but I think we are both very mischievous in our own way (laughs), so we were having fun with this kind of back and forth, cat and mouse thing.

''But it's not a cat and mouse, it's something different. It was follying, it was a lot of fun! We created our own thing so it became less about how am I going to do Tommy Lee Jones, more in finding a rendition of Tommy, and then making it our own.''

Barry Sonnenfield's latest flick sees Josh play a young version of Tommy Lee Jones' character, Agent K, who teams up with Agent J (Will) when they go back in time to save the world.

The 44-year-old 'Goonies' star said that he knew from the very first ''make or break'' scene the pair shot together that the film was going to work.

Speaking about his favourite memory from filming, he added to Flicksandbits.com: ''The first scene me and Will shot was the first scene that's in the movie with us together. When I'm sitting there looking at J, who's looking around at all the 60s motif, and then he looks at me and he's telling me something and I say, 'How do you know my name?'

''That was the first scene we did in the movie, so that was an exciting moment for me because that's a make or break moment. All the talking and the rehearsing, all of the studying we did, it comes down to that moment. It was the moment of, 'Is this going to work or not?' That was a great moment.''