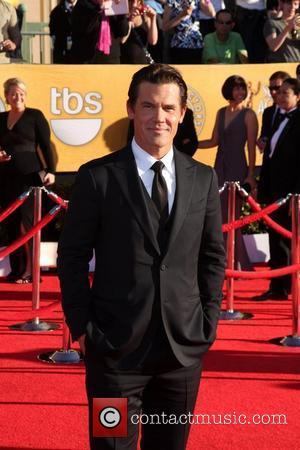 Josh Brolin and Edward Norton shared a smooch and Kate Beckinsale made out with Star Wars wookie Chewbacca in comedian Jimmy Kimmel's 2012 post-Oscars late-night skit.
The funnyman traditionally hosts a chat show immediately after the Academy Awards, which are held across Hollywood Boulevard in Los Angeles just yards from his studio, and it features a star-studded spectacular.
This year (12), Kimmel wowed TV viewers with his Movie: The Movie trailer, which featured Brolin as President George W. Bush - who he portrayed in the film W - and Norton as his gay spy lover and British beauty Beckinsale, who appeared naked in bed after a sex session with Chewbacca.
The hilarious sketch also featured cameos from Ryan Phillippe, Jessica Alba, Taylor Lautner, Antonio Banderas, Colin Farrell, Charlize Theron, Cameron Diaz, Samuel L. Jackson, Jessica Biel, Meryl Streep and Dame Helen Mirren.
Meanwhile, the butt of Kimmel's late-night jokes, Matt Damon, appeared as a purple grape and was told he would be cut out of the finished film, prompting him to rage, "Are you f**king kidding me? I will f**king kill you, Kimmel", before flashing his purple genitalia.
His Ocean's Eleven co-star George Clooney also appeared as a disabled NASA scientist, while Tom Hanks played a robot lawyer and Precious actress Gabourey Sidibe showed up as Black Hitler, riding an asteroid on a crash course towards earth.