Jordin Sparks Gets 'Chills' Thinking About Whitney Houston In 'Sparkle' 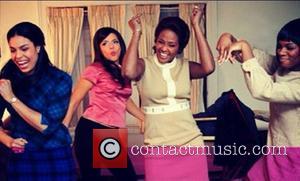 Picture: Jordin Sparks posted this image of Whitney Houston to her twitter with the caption 'We found the pic!!! Me, the girls & Whitney doin the...

Jordin Sparks has spoken about her acting role in the musical 'Sparkle' alongside the late music veteran Whitney Houston and admits thinking back on some scenes with the singer gives her 'chills'.
When the sixth season 'American Idol' winner managed to salvage her showbiz career by switching to acting after her music career faltered, it was extremely lucky that 'Sparkle' came along. '[It] just fell into my lap', she told the Washington Post in an interview. 'I read the script and fell in love with it. I related a lot to Sparkle. She's a girl with a dream, and she's gonna do whatever it takes to get to the top.' The movie is a remake of the 1976 musical and Sparks played the title character who, alongside her sisters, attempts to burst into the music scene in Detroit in the late '60s.
It being her first major acting role, the fact that the 'I Will Always Love You' hitmaker starred as her Christian mother who had a lifetime struggle battling various personal demons before pulling her life back on track made it all the more a nerve-racking experience for Sparks. Houston passed away in February 2012 after a struggling with drug addiction most of her life. Sparks talks about how one scene where Houston's character shouts at Sparkle and her sisters after finding out they've started a girl group behind her back saying, 'Was my life not enough of a cautionary tale for you?' will remain etched in her mind as a rather poignant moment. 'Watching the movie now with her not here, it holds even more weight', she said. 'I just got chills thinking about it.'