Joni Mitchell is ''awake and in good spirits'' but is still being treated in intensive care at a Los Angeles hospital after she was found unconscious in her home. 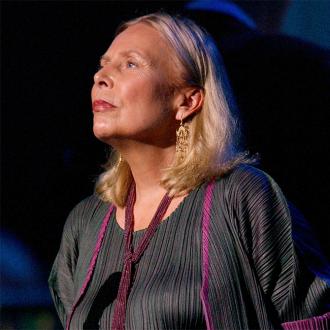 Joni Mitchell is ''awake and in good spirits''.

The 71-year-old singer is currently in intensive care after being found unconscious in her home and fans have been asked to ''light a candle'' for the star.

A recent statement on her website reads: ''Joni was found unconscious in her home this afternoon. She regained consciousness on the ambulance ride to an L.A. area hospital.

''She is currently in intensive care undergoing tests and is awake and in good spirits. More updates to come as we hear them. Light a candle and sing a song, let's all send good wishes her way. (sic)''

An earlier statement confirmed the 'Big Yellow Taxi' hitmaker - who was inducted into the Rock and Roll Hall of Fame in 1997 - had been hospitalised.

It read: ''Joni has been hospitalised.

''We are awaiting official word on her condition and will post it here as soon as we know. (sic)''

Meanwhile, Joni previously admitted she had endured years of anguish after she was diagnosed with the rare Morgellons disease, which makes the sufferer experience crawling, stinging, and biting sensations on their skin.

In her memoir, 'Joni Mitchell: In Her Own Words,' she shared: ''At the height of my illness I could not even wear clothing. All the time it felt like I was being eaten alive by parasites living under my skin. I couldn't leave my house for several years. Sometimes it got so bad I couldn't walk and I'd have to crawl across the floor. My legs would cramp up, just like I was having a polio spasm.''