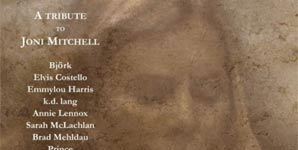 They're strange things, tribute albums. What appears a celebration of an artist's work can backfire horrendously if the covers aren't up to it, or reworkings can radically alter the listener's perception of the original.

While many acts have covered Joni Mitchell's songs over the years, this is the first full album to do the tribute business The last time the listening public heard her work in the hands of another was Counting Crows' mindless disembowelling of 'Big Yellow Taxi' - we can only be thankful that the (deeply) offending article has failed to make its way onto this disc, the songs of which cover a wide range of Joni Mitchell's canon (material from 1970's Ladies of The Canyon and up to 1994's Turbulent Indigo is reprised here). It is certainly a measure of her esteem and influence that such big names are present to pay homage - you don't often find Prince, Bjork and James Taylor rubbing shoulders for the same cause but all three have in the past spoken fondly of the Canadian songstress's influence . Of these three, James Taylor's 'River' swaps the original's piano-led Jingle Bell intro for Good King Wenceslas and acoustic guitar, and the song is a wonderfully lush blanket of festive warmth. Prince meanwhile pulls out his best falsetto for a smooth and soulful (and heavily edited) 'A Case of You'; it's a startling interpretation that Mitchell fans will either love or hate, but taken out of context it's great stuff. Ms Gudmundsdottir is uncharacteristically off the pace with 'The Boho Dance' however; despite an intriguing collage of minimal electronica it's arguably a vocal melody that remains slightly too repetitive to do justice to either songwriter or singer.

It is clear early on in proceedings that arrangements are to be more varied than the originals. Sufjan Stevens is charged with getting things started and to good effect - a playful horn- and vibraphone-fuelled 'Free Man In Paris' skips with jazzy delight, flipping unexpectedly to a superb waltzing chorus virtually unrecognisable from the original. Emmylou Harris makes 'The Magdalene Laundries' the song it arguably should have been; her mournful country delivery is the perfect foil to the hardship tales contained within the lyric and the result is much more satisfying than Mitchell's now dated-sounding recording. Not so unfortunately with Elvis Costello's drab 6-minute deceleration of 'Edith and the Kingpin'; despite an ambitious harder-edged jazz approach the track is made almost unlistenable by Costello's smug overbearing vibrato. Elsewhere in the jazz mould Brad Mehldau does his best Keith Jarrett impersonation on a solo piano rendition of 'Don't Interrupt The Sorrow', and Caetano Veloso drums up - literally - a cheeky latino 'Dreamland'.

K.D. lang's faithful 'Help Me' is the closest that any of the acts comes to the original recording, sticking rigidly to Mitchell's arrangement but not necessarily any worse for it. Likewise Sarah McLachlan attempts to wholly inhabit Mitchell's voice for a wonderfully woozy, dreamlike 'Blue'. Two of the more successful reworkings are Cassandra Wilson's humid restyling of 'For The Roses', a majestic six minutes simply oozing with a haunting reverbed arrangement and whispered vocal; and Annie Lennox's eastern-tinged synthony of 'Ladies of The Canyon', exchanging Mitchell's original cosiness for a robust out-and-out celebration that suitably complements Lennox's stronger vocal style.

While Joni fanatics may blanche at a few of the artistic licences taken within the 12 tracks here, it is generally the more adventurous covers that take the plaudits and the stylistic variation showcases the depth of Joni Mitchell's songwriting skills to a greater extent than a whole album of acoustic tracks. A useful and accessible introduction to a songwriter whose influence surpasses her fame.