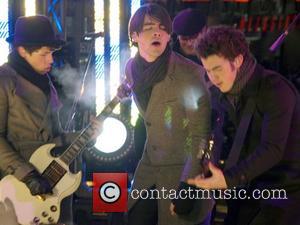 Jonas Brothers star Joe Jonas and his ex, Taylor Swift, added to the big chill in New York on New Year's Eve (31Dec08) when they found themselves on the same stage just before midnight.
The Jonas Brothers had just performed as part of DICk Clark's New Year's Rockin' Eve with Ryan Seacrest when they were pulled up onstage with the TV spectacular's host to discuss the night's chilly temperatures and ring in 2009.
As the ball dropped on Times Square, revellers faced a freezing 19 degrees with a windchill of two - but it was even colder onstage as Swift and Jonas attempted to make the most of their end-of-year (08) face-off.
Bitter Swift recently revealed her ex broke off the couple's 2008 romance in a 25-second phone call.
The former couple refused to make eye contact as they stood at opposite ends of the stage, but they shared a brief hug in the early seconds of 2009 as fans celebrated the New Year.
Swift admitted she was stunned by her first New Year's celebration in New York: "I have never seen anything like this in my life. This is life changing."