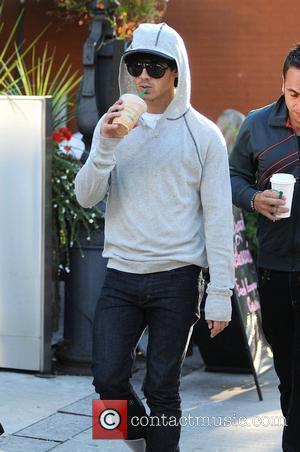 Picture: Joe Jonas of the Jonas brothers seen out with a coffee in Yorkville Toronto, Canada - 05.09.09

The Jonas Brothers were left in shock when a fan handed them a dead shark as a gift.
The trio regularly receive armfuls of presents from their devoted teenage followers, but they were taken aback when one female fan handed them a particularly strange item with bite.
Joe Jonas tells Digital Spy, "The craziest thing we've ever been given is definitely a dead shark," while his brother Nick adds, "It wasn't a real big shark though. It was only a baby shark but they'd preserved it in this tube for us. That was odd. They didn't even leave a note explaining. It was just, 'Here's a dead shark.'"
And Kevin insists they are still baffled by the odd gift: "We're still trying to figure out how they actually went about buying a dead shark. I mean, is there such website as Buyadeadshark.com?"