These boys are back, but did they ever really leave?

The Jonas Brothers made a comeback recently. Didn’t notice? Well that’s because they only formed in 2005, and they’ve pretty much been around since then. Still, comebacks and reunions sell, so we can see why they’ve marketed whatever it is they’ve done, as that.

"It feels really nice. It's kind of like we never left. We spend a lot of time together, even when we're not doing music, but finally making music together is great and we are very happy that people are actually showing up to concerts and listening to the music yet again," Jonas Brother Joe told MTV News. But if you think they just came up with all the music and said “let’s go,” then you’d be wrong. It took deliberation, and a failed batch of songs to get back on track. "It wasn't right where we wanted it to be. It wasn't progressive enough. I think this record we wanted to take the time needed." After they worked on separate projects (yes, we’re playing along with this reunion) they decided to get back together and give the crowds what they want. 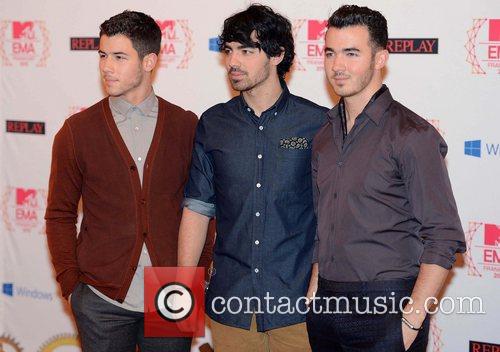 The lads at The MTV EMA's 2012 held at Festhalle

"I think it was a collective decision. We came to a place where we had sort of done our individual projects, and it felt like we were in a place where we were ready to create again and come back with some different inspirations," said Nick. There’s no release date as of yet for their upcoming album, but The Jonas Brother tour is set to kick off on July 10th in Chicago.