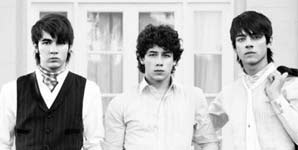 The self-titled album from the US million selling band made up of the 3 brothers Nick, Kevin and Joe Jonas who have been living the dream since there debut in 2007. With their newest album and the track listings ranging from ‘That’s Just The Way We Roll’ to ‘Hello Beautiful’ you can tell that this will be aimed at 6-13 year old girls.

The last single released by them ‘S.O.S’ kicks off the album and the next song on it ‘Hold On’ are more pushing towards alternative rock than Disney pop and make you wonder why they tour with Hannah Montana and not more rockier bands as they could easily go more in that direction and they have the right style for it.

Personally I find ‘S.O.S’ and ‘Hold on’ the best songs on the album, you start listening to it and feel as if you could get into it, until it goes into the typical pop boy bands lovey-dovey heartbroken style songs. When you get further into the album you hear ‘Hello Beautiful’ and the lines ’Cause I could go across the world & see everything and never be satisfied if I couldn’t see those eyes’ And then that’s when you realise, yes, they should stick with Hannah Montana, pretty typically lines for Disney-signed Hollywood Records-recording artists.

The album as a whole is pretty much about how girls break their hearts, even the one called ‘Australia’ is about a girl from Australia, it’s all a bit too samey and predictable, and well they really just sound like old Brittany Spears songs. The song ‘Just friends’ you already know what’s coming in the song before you listen to it ‘there she goes again, the girl I’m in love with, but its cool cause where just friends’. Also the winey singing voice that all three of them have can be very annoying even after listening to it just the once.

This album really is for 6-13 year old girls with nothing better to do than drool over 3 pretty boy’s that are just conforming to what Disney wants them to be, they are just a generic boy band that define the word ‘corny’.