The two actors take the leads in the trailer for their latest film, True Story

James Franco has a True Story to tell and he wants to tell it to Jonah Hill. That's the premise of Franco's latest film, based on, ironically, a true story, as he plays one of the FBI's most wanted men, Christian Longo, convicted of murdering his wife and three children. 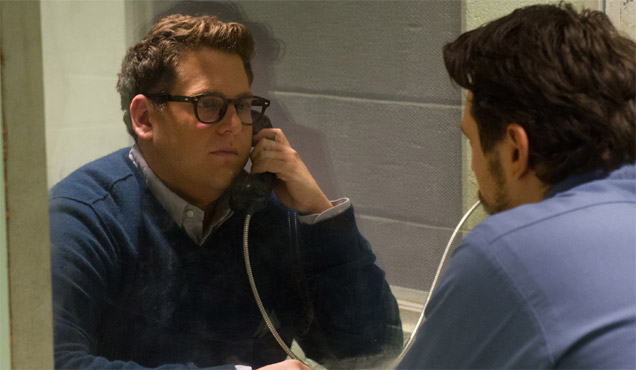 Hill plays disgraced journalist Michael Finkel, who was fired from the New York Times and whose name has been used by Longo to escape police custody.

Finkel is intrigued and on the hunt for a story having been dismissed from his previous job for fabricating large parts of a piece he wrote about the African slave trade.

MORE: The Interview: Why It Could Only Have Ever Been James Franco And Seth Rogen

Adapted from the real Michael Finkel's memoir, who was fired from his job in 2001, the plot follows a wordsmith down on his luck, with no work prospects and a girlfriend desperate for everything to be alright.

Suddenly, in Longo, Finkel has a True Story.

MORE: Is There A Method To James Franco's Madness?

The film is directed by Rupert Goold in his feature film directional debut and the screenplay has been adapted by David Kajganich who is behind a number of upcoming Stephen King adaptations, Pet Sematary, IT and The Strand.

Fresh from The Theory of Everything success is Felicity Jones who has unfortunately been sidelined to a minor role and Ethan Suplee, Gretchen Mol and Robert John Burke also star.

The film is due for a limited release in April in the US but has yet to be given a date for the UK.