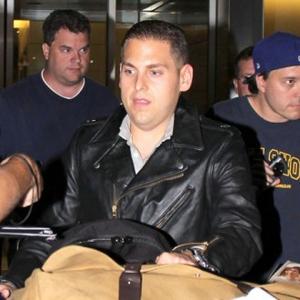 Jonah Hill has accused Matthew Morrison of bullying him at a recent showbiz event - and is out for revenge.

The 'Moneyball' star was told by the 'Glee' star to be quiet at a presentation for the Fox network in May while he was talking to his actress friend Zooey Deschanel, immediately after a female organiser had also told him to stop talking.

Jonah - who was at the event to promote his upcoming animated comedy 'Allen Gregory' - was left angry after the entire room laughed at him and he still isn't happy.

During an appearance on 'Late Night with Jimmy Fallon' yesterday (22.09.11), the comic star said: "Do you know this guy Matthew Morrison on 'Glee'? This guy piggybacks on this woman calling me out. I've never met this guy in my entire life. He goes, 'Yeah Jonah, can't you stop talking for one second?' And everyone laughed at me!

"I already got it in my head that I don't like this guy. I'm sure he's a good human being, but you don't throw a dude under the bus who's just sitting there being quiet. I've never met him before. He bullied me!"

And this is not the only time Matthew has done something to anger the 'Superbad' star.

A few weeks after the incident the pair were at a Hollywood party, and Jonah, 27, overhead the 32-year-old actor telling a joke to 'Gossip Girl' star Chace Crawford in which Jonah was the punchline.

Now, he has challenged Matthew to "bring his s**t" the next time he sees him.

Staring directly into the 'Late Night...' cameras, he said: "Yo Matthew Morrison, you better bring your s**t next time, dude. I'd like to see him sing his way out of this one!"