He thinks the media need to get over President Trump.

An unexpected surprise came on 'The Late Show with Stephen Colbert' this week in the form of Jon Stewart, who crashed the show in a bid to deliver a stern message to the mainstream media regarding their apparent 'break up' with President Donald Trump. 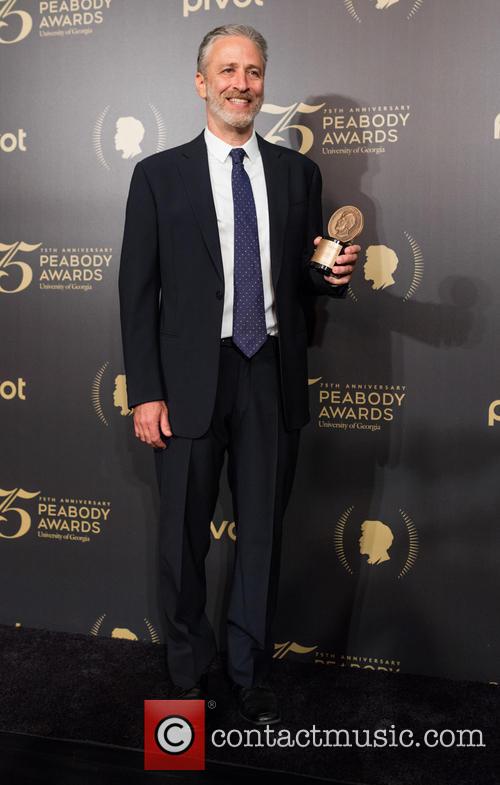 As Stephen Colbert was lamenting the foregoing of the first amendment by Donald Trump at the White House's recent press briefing in regards to the President banning a series of news outlets including CNN, LA Times, New York Times, Politico and BuzzFeed, Jon Stewart appeared from under his table to put his two cents in.

'I can't believe the guy's got the balls to get away with that', he exclaimed. 'Trump lies more in one press conference than CNN does in a year, and this is coming from a guy who - as you know - hates CNN.' He referenced a number of bogus statements made by the President at his most recent press conference, insisting that he was 'lying on purpose'.

'You know how I know how? Because he constantly says the phrase 'believe me'', he quipped. 'Nobody says 'believe me' unless they are lying.'

The former 'Daily Show' host, who has never had a brilliant relationship with the media (particularly CNN), also weighed in on the situation with the news outlets, likening their cover of Donald Trump to a troubled relationship.

'Hey media! So I heard Donald Trump broke up with you', said Stewart to the camera. 'Stings a little, doesn't it? Finally thought you'd met your match? A blabbermouth who's as thin-skinned and narcissistic as you are. Well, now it's over. Well, good riddance, I say! Kick him to the curb. It is time for you to get your groove back, media.'

He went on to suggest that the media take up a hobby ('I recommend journalism') and criticized their positivity towards Trump in the months leading up to the election ('70-year-old men don't get less cranky or racist as time goes by').