Jon Stewart Signs Off From The Daily Show With Tributes

Comedian Jon Stewart Became The Latest U.s. Tv Heavyweight To Step Down On Thursday Night (06aug15) When He Quit The Daily Show After 16 Years. 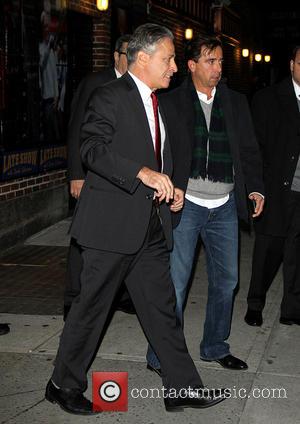 The acclaimed satirist bid farewell to viewers by welcoming back former correspondent Stephen Colbert, who will take over from David Letterman as the host of The Late Show next month (Sep15).

Colbert joined a collection of Daily Show writers, correspondents and producers, past and present, including Steve Carell and John Oliver guests who recalled highlights of the late-night Comedy Central network programme.

Stewart fought back tears as Colbert paid tribute to his former boss, stating, "You were infuriatingly good at your job. All of us who were lucky enough to work with you for 16 years are better at our jobs because we got to watch you do yours."

Meanwhile, Stewart's musical heroes, Bruce Springsteen and the E Street Band, were there to perform a final song, Born to Run, and many of the top politicians the host has poked fun at over the years appeared as part of a video segment, including Hillary Clinton, John Kerry and John MCCain.