It's time to pack your bags, cover your neck and head on over to the glitziest five-star hotel known to the underworld, as we head to Hotel Transylvania.

A League Of Their Own Review

By Pete Croatto
Excellent
Ah, baseball. The mere mention of America's pastime brings forth images of fresh grass, sunny days, endless labor disputes and another round of steroid controversy.

If you're tired of the ugliness surrounding the summer sport, or just need to be entertained, than you should check out A League of Their Own, now out on DVD. Like most great sports movies, League is more than just a series of dazzling feats between the lines. It features laughs, drama, and excitement... in short all of the aspects that make the sports section of the newspaper so captivating.

Continue reading: A League Of Their Own Review

By Christopher Null
Bad
Those of you hoping to hear about a clever casino heist picture in the style of Ocean's Eleven are in for a sore disappointment. From this movie's opening frames, featuring dueling CGI-animated scorpions, it's obvious that we're in for some punk-ass director's idea of a snazzy action film.

By Robert Strohmeyer
Excellent
For better or for worse (mostly for the worse) Adam Sandler's back on the big screen. And it's pure, satanic family fun.

Little Nicky (Adam Sandler) is the devil's third---and least impressive---son. Bested in brains by his brother Adrian (Rhys Ifans) and in strength by his brother Cassius (Tiny Lester), Nicky finds little joy outside of hanging out in his hell-bound bedroom, banging his head to heavy metal favorites. That is, until his father's 10,000-year reign draws to a close and it's time to name the new ruler of Hades.

As if searching for some nonexistent middle ground between the cartoon raunchiness of "South Park" and the innocuous banality of a cheap children's Christmas special, Adam Sandler has now weaseled his way into the animation and holiday genres with "Adam Sandler's 8 Crazy Nights."

A sub-formulaic slap in the face to seasonal cheer, it's a movie about an acrimonious, 33-year-old layabout with Sandler's voice and Sandler's doltish manner whom we're also supposed to laugh along with as he makes fun of fat little kids and kicks port-a-potties down snowy hills with people inside. But the movie also expects us to view him as a big jerk with a tormented soul who is badly in need of a "Christmas Carol"-type personality breakthrough.

Sentenced after a drunken rampage to doing community service as a youth basketball referee (depicted in exactly one scene of the movie), the cartoon Sandler is taken in by a fellow ref who feels sorry for him -- a kindly, seizure-prone, 70-year-old midget gimp with a shrill, whimpering, falsetto voice (also Sandler's). But he treats the old man (and everyone else) like garbage until he finally has an overdue cry about how his parents died when he was 12, then sees the error of his ways just before the credits roll. 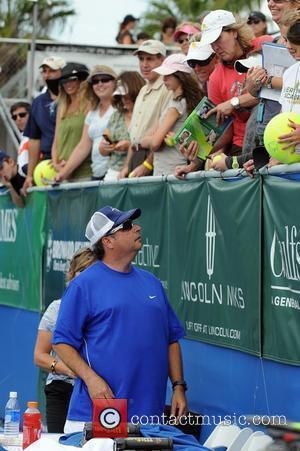