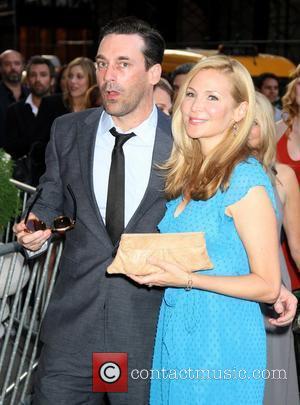 Picture: Jon Hamm and Jennifer Westfeldt The Cinema Society With The Hollywood Reporter & Piaget and Disaronno screening of 'To Rome With Love at the Paris...

Jon Hamm and his girlfriend Jennifer Westfeldt had a rather less than enjoyable holiday across the Atlantic in London last month after it was revealed that the couple were robbed whilst visiting, reports Life & Style. The incident occurred, apparently, as they were out for dinner, with Westfeldt losing her wallet as a result.
"They were dining at a restaurant and Jennifer's purse was snagged by someone," a source told Life & Style. "That person took the hotel key in Jennifer's purse, which had the hotel name on it, and robbed their room. They had to contact the police, it was horrible." It was news that was later confirmed to the magazine by Westfeldt herself, catching a quick word with them at Tropfest in New York on June 23rd to reflect "What a mess. [I'm not feeling] great. It is under investigation."
However, the pair in the long run are in good spirits, with Westfeldt claiming that her and Hamm had never felt closer after 15 years of dating - a lifetime in the celebrity world. "Some people would say they could never work with their partner, but we found it incredibly bonding," she said with regards to working with her boyfriend on their new film 'Friends With Kids'. "Independent films are so stressful; it feels like pushing a boulder up a hill. So it felt great to have a partner in crime."