Jon Hamm On What Happened to Don Draper

Jon Hamm has had his say on the Mad Men finale.

Jon Hamm, who starred as troubled creative director Don Draper in AMC's signature drama Mad Men, has offered his own interpretation of what happened to his character after the series finale on Sunday. 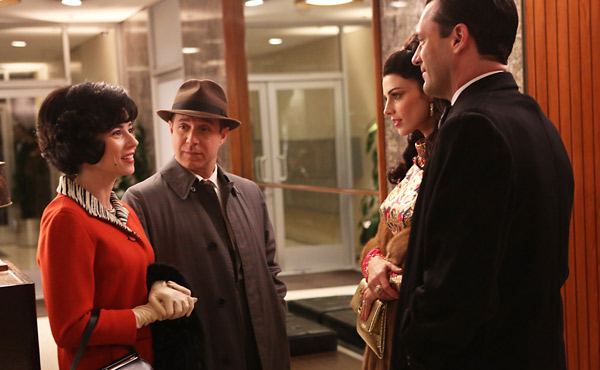 After being adrift for a while, Draper found himself at a commune on the West Cost and after achieving inner peace, he created Cola-Cola's iconic I'd Like To Buy the Word a Coke commercial.

"My take is that, the next day, he wakes up in this beautiful place, and has this serene moment of understanding, and realizes who he is. And who he is, is an advertising man. And so, this thing comes to him," Hamm told The New York Times. "There's a way to see it in a completely cynical way, and say, 'Wow, that's awful.' But I think that for Don, it represents some kind of understanding and comfort in this incredibly unquiet, uncomfortable life that he has led."

It's believed that series creator Matthew Weiner has had the ending for some time and Hamm, 44, told the times as much, confirming that the showrunner had always intended to finish with the Coke ad.

"There's people saying, 'Oh, it's so pat, and it's rom-com-y, or whatever it is.' But it's not the end of anything," he said. "The world doesn't blow up right after the Coke commercial ends. No one is suggesting that Stan and Peggy live happily ever after, or that Joan's business is a rousing success, or that Roger and Marie come back from Paris together. None of it is done."

"These aren't the last moments of any of these characters' lives, including Betty. She doesn't have much time left, but damn if she's not going to spend it the way she wants to spend it," he continued. "Matt had said at one point, 'I just want my characters to be a little more happy than they were in the beginning,' and I think that's pretty much true."

Despite Mad Men's conclusion, Hamm remains in high demand and is currently shooting comedy Keeping Up with the Joneses, about a suburban couple who become suspicious of their new hot neighbors.