Actor Jon Hamm Showed Off His Singing Skills As He Joined Comedian Zach Galifianakis At The Bonnaroo Music And Arts Festival For A Surprise Appearance On Saturday (13jun15). 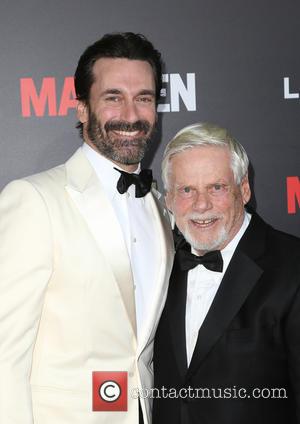 Picture: Jon Hamm and Robert Morse - A host of stars were photogrpahed as they attended the AMC Celebration of The Mad Men 7 Episodes Of...

The former Mad Men star was a special guest at the Tennessee festival's annual SuperJam, a late night concert in which artists perform classic covers.

Saturday night's theme was 80s Throwback SuperJam, and Hamm and Galifianakis kicked off the event by leading the crowd with a rousing rendition of the 1985 USA For Africa charity single, We Are The World, which famously featured a star-studded roster of celebrities such as Michael Jackson, Ray Charles, Bruce Springsteen and Cyndi Lauper.

Earlier in the day, Hamm also surprised fans during Galifianakis' stand-up comedy set, where The Hangover star played a dog and Hamm portrayed his owner, feeding him special treats.