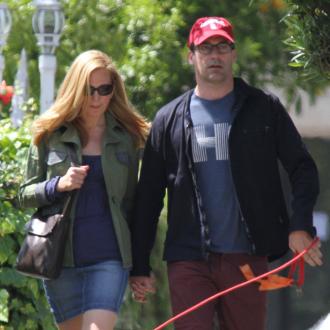 The 'Mad Men' star, who recently sought treatment in rehab for alcohol abuse, admits he doesn't make any decisions without consulting the 45-year-old actress.

He said: ''Well, Jen and I have been together for 17 years now, and everything that happens in our lives gets run by one or the other.''

The heartthrob also credits his long-term partner for helping him to detach himself from his character Don Draper after recently wrapping up work on the final season of the show.

He said: ''After we wrapped, Jen and I went to Martha's Vineyard for two weeks to decompress. That was really nice.''

Jon, who lost his mother when he was 10 and father when he was 20, has struggled with depression in the past, but tries not to ''exploit'' his personal experiences when acting.

He explained to US' OK! magazine: ''I think what does happen is it teaches you to pull your life back together and maybe makes you a bit wary of indulging too much in your happiness - you worry that things might fall apart. It's not something that ever leaves you, although you can move past it.''