The 43 year-old actor confessed that the final scenes of the Oscar-winning animation made him very emotional. 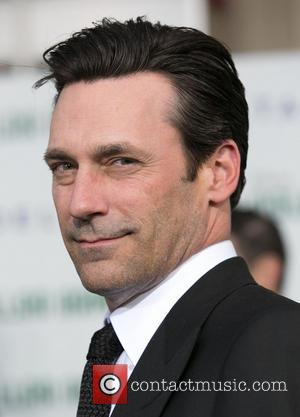 Jon Hamm appears to be quite a sensitive man.

The 43 year-old actor recently took part in a candid interview with Vanity Fair's June Issue, in which he features on the front cover, and revealed many unknown facts about himself.

One of them turned out to be very surprising.

Hamm may seem like a one of the more masculine men in showbusiness today, but during a 2-minute bonus clip of the interview he confessed to which two films last made him cry.

The 'Mad Men' actor shed a tear for the super villain tale in 'Despicable Me 2,' but it was Disney's animated fairytale 'Frozen,' that made him cry uncontrollably.

Surprisingly, this is the second time Hamm has expressed his unlikely fondness of the Oscar-winning animation.

When speaking with HitFix last month, he admitted the final scenes of the tale about determined princess who sets off on an epic adventure was the biggest tear-jerking moment.

When the interviewer refused to believe that the 'Bridesmaids' actor actually cried during the flick, he adamantly replied, "Come on, when she turns into ice to save her sister . done."

Both 'Despicable Me 2' and 'Frozen' also have hugely popular soundtracks, but when asked if he preferred 'Happy' or 'Let It Go', Hamm could not decide.

"That's a toughy," he said. "That's like gold or platinum." But he did note, "'Happy' is pretty infection."

MORE: Jon Hamm Is More Than A Piece Of Meat

Watch the 2-minute bonus clip below