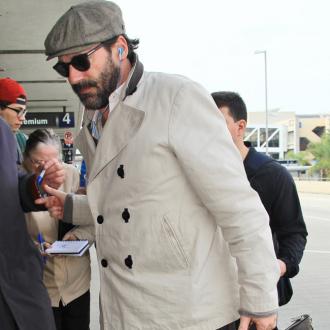 Jon Hamm has completed a 30-day stint in rehab for alcohol addiction.

The 'Mad Men' star reportedly checked into Silver Hill Hospital in New Canaan, Connecticut at the end of February to undergo treatment.

A spokesperson for the 44-year-old actor confirmed the news to gossip website TMZ.com, saying: ''With the support of his longtime partner Jennifer Westfeldt, Jon Hamm recently completed treatment for his struggle with alcohol addiction. They have asked for privacy and sensitivity going forward.''

Jon previously admitted he battled depression after his father died when he was 20.

During an interview with The Observer in 2010, he said: ''I was ... unmoored by that. I struggled with chronic depression. I was in bad shape.

''I did do therapy and antidepressants for a brief period, which helped me. Which is what therapy does: It gives you another perspective when you are so lost in your own spiral. It helps. And honestly? Antidepressants help!

''You can change your brain chemistry enough to think: 'I want to get up in the morning; I don't want to sleep until four in the afternoon. I want to get up and ... go to work and ...' Reset the auto-meter, kick-start the engine!''