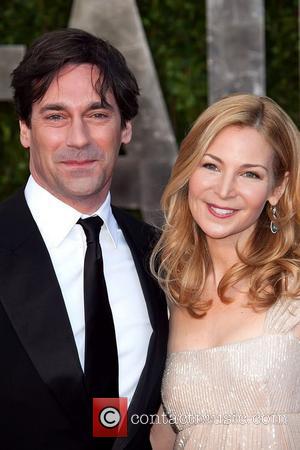 Jon Hamm celebrated his 40th birthday on Thursday (10Mar11) by hosting a lavish party in New York City, with celebrity guests including Paul Rudd and Sarah Silverman.
The Mad Men star reached the landmark last week (ends13Mar11) and he marked it with an extravagant birthday bash at the Standard Hotel in Manhattan.
Hamm and his group, including his longtime girlfriend Jennifer Westfeldt, took over the hotel's Top of the Standard nightclub for the event, according to the New York Daily News.
The actor was reportedly unsteady on his feet by the end of the evening's festivities and had to be helped to the exit by two male friends.