Guitar virtuoso Jon Gomm continues to break new ground with his jaw-dropping strumming style, and now fans can get a taste of the raw, untouched live experience with his upcoming acoustic album 'Live In The Acoustic Asylum'. It's Gomm like you've never heard him before.

His new release is a stripped back collection of fan favourites, re-invigorated originals and tunes with a special place in his heart that he rarely exhibits on the live stage. In the last few weeks he's been sharing videos from the album through social media; completely gimmick free, showing nothing more or less than his intensely magnificent fret-friendly fingers. 'The way I play guitar is quite visual. There's a lot going on', he explains. 'I'm playing the drums and the bassline and stuff on guitar at the same time and I don't want lots of stuff going on in the video to detract from that.' His latest video is 'What's Left For You?', and it certainly proves you only need Gomm's performance to keep your eyes glued to the screen.

More: Jon Gomm's last album, 'Secrets Nobody Keeps', was one of Ben Walton's top albums of 2013

This live version of 'What's Left For You?' is a brand new rendition of the song, which originally featured on his second album 'Don't Panic' with vocals from his also-musical wife Natasha Koczy. Now he's gone completely solo on this track that he says is 'really important to me personally', but the reason why might surprise you. 'I wanted to do a video that was just solo stuff mainly because YouTube is one of the places on the internet that's still anonymous and people will still post really horrible things', he admits. 'A lot of trolls live on YouTube and it's really scary putting a video with your wife in it on YouTube because you're going to get horrible comments. We're not ready for that yet.'

Watch the video for 'What's Left For You?' here:

Though, of course, with all the negativity comes twice the love, and Jon Gomm's fanbase is ever growing since he released his debut album 'Hypertension' in 2003. From then on, the Leeds-based guitar genius has toured extensively in every continent in the world and proved to all budding musicians that you don't need a team of industry boffins to get yourself recognised. He's released all his music on his own label Performing Chimp, and even did his own promotion in the early days - covertly putting up flyers around the city with his face partly obscured by his hoody so as not to give away that he is the one on the posters.

Nowadays he doesn't have to worry about that, but being the humble musician that he is he still enjoys engaging with his devoted fans on Facebook and Youtube. Among those fans are such legends as Stephen Fry, who gave Gomm a massive boost when he praised his breakthrough 'Passionflower' video on Twitter in 2012. Then there's Tommy Lee from Motley Crue and Steve Lukather from Toto, not to mention Bangladeshi superstar Sumon who is also known as 'bassbaba' (or 'father of bass'). He was even asked to contribute on Rod Stewart's 2012 Christmas album 'Merry Christmas, Baby' by producer extraordinaire David Foster - though declined.

More: Watch the video for 'Passionflower'

Gomm is hoping the new video will have the same effect as 'Passionflower' did on the world. There's definitely an interesting enough story behind it. By his own admission, having been cursed with a permanently glum expression since childhood, he has always had to tolerate people continuously telling him to 'Cheer up'; and it seems 'What's Left For You?' reveals one of the more unusual conversations that followed one such occasion while he was enjoying a long train journey. 'This old Rasta guy sitting opposite me said, 'Cheer up, man, why do you look so down?' And he just decided to engage me in a conversation that lasted about two hours and culminated with him telling me what he swore blind is the meaning of life', Gomm reveals. 'But I had no idea how this was supposed to relate to me or what it meant or anything so I just put it in the song, pretty much verbatim as much as I could remember it. So the song contains the meaning of life.' 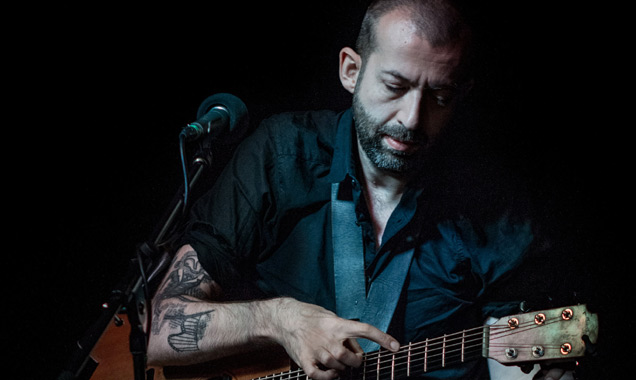 Following the album release, Gomm will be on the road again from September 10th through to October 27th, playing across the UK and stopping in Canada in between. Then February 2016 sees him hit Europe, with many further global dates to follow. He's also booked to revisit East Asia again to perform in the likes of Seoul, South Korea and - the most bafflingly random - Mongolia. It just goes to show that Gomm truly is, to use a tired cliché, taking the entire world by storm.

'Live In The Acoustic Asylum' is out today (September 8th 2015) on Performing Chimp.