Leeds singer songwriter and guitarist virtuoso Jon Gomm's new offering is something to behold. Although at times hard to believe, all the sounds come from his acoustic guitar and his vocals, there is no looping, over dubbing or percussion. A classically trained guitarist, the techniques he uses on this album are something else. 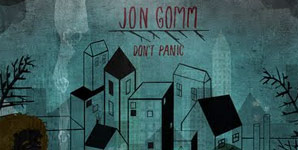 Opener Waterfall showcases many of the techniques that we see throughout the album, acoustic guitar and percussive elements and Gomm's seductive vocals. Temporary focuses more on the vocals, smooth and fragile. The slightly indulgent instrumental Topeka just shows what this man can do with a guitar and the results are breathtaking. The deep bass of Loveproof adds another dimension and is offset by Gomm's high gentle vocals. The album is rounded off by the classical melodic picking of What's Left For You? whose duetting vocals provide a fitting if a little haunting end to the record.

Despite the sparse instrumentation, Gomm's skills and techniques with a guitar manage to make this a rich album with plenty of depth. His vocals and lyrics add the emotional element but it's the music that really captivates, more so when you think about how it is produced. It's difficult to imagine anyone else even coming close to producing such a masterpiece in the acoustic arena today.