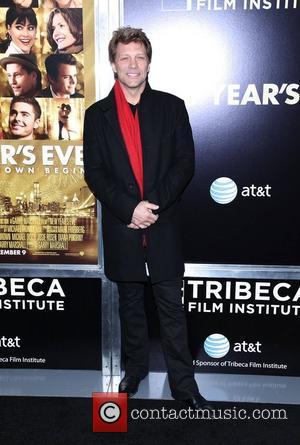 Today (March 2, 2012) marks Jon Bon Jovi's 50th birthday. The New Jersey rocker formed his band Bon Jovi in 1984 and since that time, he's toured the world several times over and released no fewer than 11 studio albums; four of which became US number ones.
This year, Bon Jovi will be headlining May's Bamboozle festival on May 19 in Asbury Park, New Jersey. The festival itself is celebrating its 10th anniversary and although it is generally associated with a younger crowd, Jon Bon Jovi will be celebrating his 50th year on the planet with a headline slot there on the main stage. Other artists scheduled to play the event include Foo Fighters and Blink 182 and around 40,000 tickets are expected to be sold. Occasionally, Jon Bon Jovi also turns his hand to acting, when he's not rocking out with his comrades, Richie Sambora, Tico Torres, David Bryan and Hugh MCDonald. In 2002, he had a recurring role in the popular TV series Ally MCBeal and in December 2011, he featured in the star-studded ensemble cast of New Year's Eve, which included Michelle Pfeiffer, Zac Efron, Robert De Niro and Halle Berry.
Jon Bon Jovi married his wife Dorothea in 1989. They have four children together; a daughter and three sons. Jon and Dorothea opened The Soul Kitchen in Red Bank, New Jersey, which provides meals for people in need.