Rocker Jon Bon Jovi Gave New Jersey Governor Chris Christie A Boost As He Launched His Bid For The U.s. Presidency On Tuesday (30jun15) By Granting The Republican Permission To Use His Band's Songs For The Big Announcement. 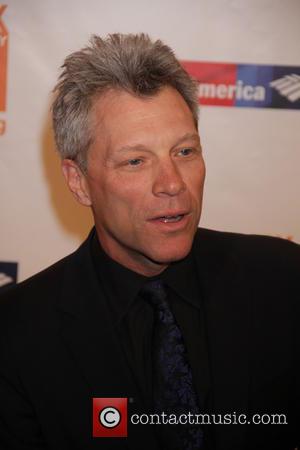 Picture: Jon Bon Jovi - A variety of stars were snapped as they arrived to the 2015 Can Do Awards Food Bank For New York City...

The musician and his wife Dorothea have already aligned themselves with Democratic presidential hopeful Hillary Clinton by hosting a fundraiser for the former Secretary of State in New Jersey on Monday evening (29Jun15), but that didn't stop the singer from letting his pal Christie play a handful of tracks by his band Bon Jovi as the politician officially declared he was joining the race for the White House.

Supporters heard the songs Because We Can and It's My Life prior to Christie's speech, and he left the stage to We Weren't Born to Follow - and now the frontman, a longtime Democrat, has confirmed the Governor had his approval to make use of the tunes.

A statement issued by New Jersey native Bon Jovi to Billboard.com reads, "My friendships are apolitical and yes, I absolutely gave him permission to use the songs."

Trump's representatives hit back, insisting they were fully authorised to use the song, while the businessman himself later weighed in, accusing Young of being a "total hypocrite" and claiming, "Neil Young's song, Rockin' In The Free World was just one of 10 songs used as background music. Didn't love it anyway..."