A music video has been released for the title track consisting of Joia performers Athina Andrelos on vocals, Callum Read and Martin Dukelow on guitar, Tommy Williams on bass and Bill Dukelow on drums. The tune is a particularly catchy one, embraced by the seductive vocals of the Athens born female vocalist which speaks pop in verses and transitions to a more classic rock chick sound in each refrain.

The band, who hail from Essex, Hampshire and Surrey, formed early last year (2011) and started out their musical career together by writing and practising in each other's bedrooms and garages. With their classic influences such as Coldplay, Radiohead, Kings of Leon and The Smiths, this edgy and easy-on-the-ears EP recorded at Stakeout Studios in Surrey is sure to rise to popularity in the coming months. Their first recorded track was 'Brothers' that was generously available as a freebie through their Facebook page. It doesn't, regrettably, feature on their EP.

Some of the band members have previously played gigs in previous projects at places such as London Roundhouse, Shepherd's Bush Empire, Manchester Academy and at the Give It A Name Tour, so their upcoming live shows which feature Stephen Dukelow on keyboard will not overwhelm them too much. 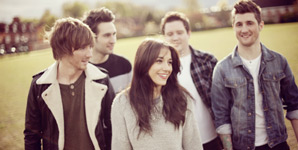