Veteran Rocker Johnny Marr Gave A Passionate Speech Rallying Against Government Cuts During A Gig In His Native Manchester, England On Wednesday (07oct15). 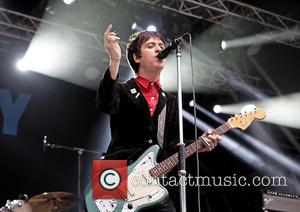 The Smiths guitarist's performance in the city came on the final day of the Conservative Party conference which was taking place there, and he took the chance to rally fans against Prime Minister David Cameron and his austerity plans.

Johnny called the cuts "inhuman" and criticised proposals to decrease funding for a school in the local area which helps disabled children. He also asked security guards to open the venue's doors so the leader could "hear" his speech.

"Mr. Cameron... There's been too many cutbacks," he declared. "This is Johnny. You know Johnny, from The Smiths, that band you like so much...

"Seeing as you're in our city I'd just like to ask you about the Brentwood school for disabled children in South Manchester. Do you know what it's like for an autistic girl to have to get on a public bus every single day? It is inhuman. This is not fair. That's not the way we do it in Manchester, Mr. Cameron, because we're fair and we're Mancunians."

Johnny also dedicated a cover of Crash by The Primitives to the British leader.

The rocker previously clashed with the Prime Minister after Cameron declared himself a big fan of The Smiths - Marr responded by declaring he would "forbid" the Conservative leader from liking his music.

Johnny Marr's theory on why singers are so difficult...